She came from Upper Egypt to Cairo carrying her dream as a young writer, and here in the capital, and after four years of continuous endeavor, through her workshop, “Let the Stories”, Zahraa Abdullah was able to include her dream into the dreams of 20 young men and women from northern and southern Egypt so that their dream comes true and reap its fruits in A collective literary work, they loaned him the name “Tales of the North and the South.”

“Wass the Stories” aims to combine treatment with storytelling and training in creative writing skills for self-expression. It ended after four years of weekly meetings that brought together young writers from all parts of Egypt to produce a collective literary work on whose pages they met their dreams through their collection of stories consisting of 38 short stories Under the title “Stories of the North and the South.”

The harbingers of this unique story collection issued last December in the year 2013 when the young writer Zahra Abdullah, from Sohag in Upper Egypt, came to Cairo in search of a publishing opportunity and a space for spread in the capital, to discover as an expatriate that life in the “city of dreams” was “lonely.” Due to her practical nature and the absence of the warmth and simplicity of the villages of the south, and after going through a harsh experience and diagnosing her as a depressive patient, Zahraa resorted to searching for the “Alonis” that she finds in the act of creative writing that represents her a lifeline. It combines literary training for young writers in the villages and cities of the North and South, combining training them in creative writing skills on the one hand and providing them with psychological support through narration on the other hand. 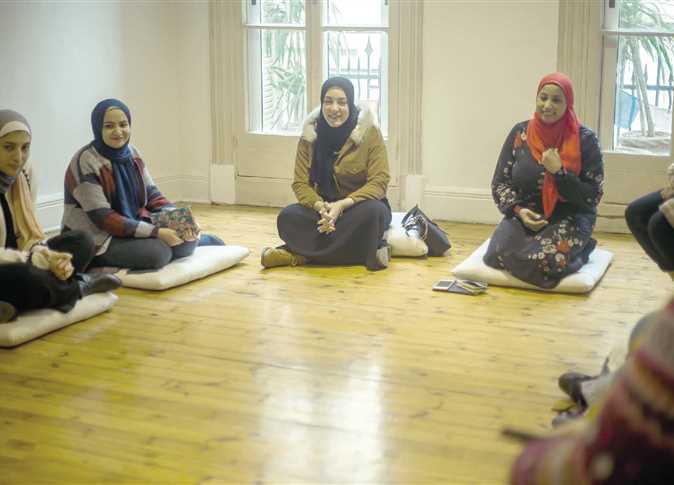 A side from the activities of “Once the Stories”

Over the course of four years, the young girl continued her dream and launched 19 sessions of the same workshop, during which about 250 young men and women of young writers from different parts of Egypt participated, and after two years of working in her own community consisting of those who liked her writing, Zahraa moved her workshop to a professional level, She decided to document the self-experiences of these writers in a collective literary work in June 2019.

The audience’s interaction with the “stories” encouraged Zahraa to take an advanced step to bring their literary work to light, until she decided to choose 20 writers, including 15 girls, until they finished producing their first story group, called “Tales of the North and the South.” Despite the difficulty of the publishing experience and its complex details, due to the costs of publishing and the difficulty of finding a home that is enthusiastic for young writers, and then the suffering of following the distribution, Zahra Abdullah, founder of the “Woman of Stories” workshop, aspires to move her workshop in all governorates of Egypt, to present a new book to the Egyptian literary community by issuing a new issue of “ Tales of North and South »every year, confirming that the dream has a rest.